The Centers for Medicare & Medicaid Services (CMS) recently issued a proposal for Medicare to cover the cost of lung cancer screening for high-risk patients. The benefit is clear…early screening saves lives.

As many as 20% of future deaths could be prevented with the new Medicare benefit
CMS would cover low-dose CT (LDCT) screening for patients ages 55-74 who have smoked at least one pack a day for 30 years, or the equivalent
Lung cancer is the #1 cancer killer in the U.S. This year, about 160,000 deaths are expected to occur from lung cancer – more than breast, prostate and colon cancer deaths combined.*

What does lung cancer screening mean for drug companies?

The door is wide open for drug makers to increase sales for their cancer treatment drugs. 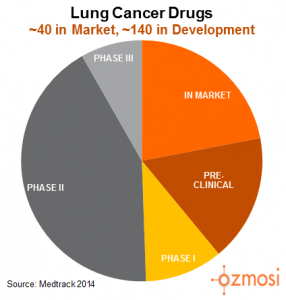 With over 40 lung cancer drugs on the market and another 140 in development, there’s potential for drug companies to capture the market for treating those newly diagnosed.

Accelerated demand on the way

The addition of the Medicare benefit will not only help save lives, but it will accelerate the demand nationwide for drugs that help manage or treat lung cancer and support those drugs that can make an impact when the cancer is caught early enough.

The CMS proposal is great news for the 220,000 people who get diagnosed with lung cancer each year. It remains to be seen which drug makers will capture the growing demand.

Tweets by OzmosiHealth
Go to Top