Unprecedented deal values for mergers and acquisitions dominated in 2014.  Worldwide M&A was up 47% since 2013 with 95 deals valued greater than $5 billion, as reported by Reuters. Most deals were transacted in the energy, media/entertainment and healthcare sectors.

If history is a guide, the cyclical nature of mergers and acquisitions will continue, and healthcare is no exception.

Healthcare deals reach a new high.  Is it supply and demand?

Deal values more than tripled last year in the healthcare sector, with the average deal at $1.4 billion.

Deals in the healthcare industry are getting pricier, driven by the number of deals coming in at over a billion dollars.  Multi-billion dollar deals in healthcare doubled from 2013 to an unprecedented 80 acquisitions in 2014.

Judging by this year’s first quarter activity, including the Pfizer/Hospira deal for $17 billion and the AbbVie/Pharmacyclics deal for $21 billion, it looks like big deals are here to stay in 2015. 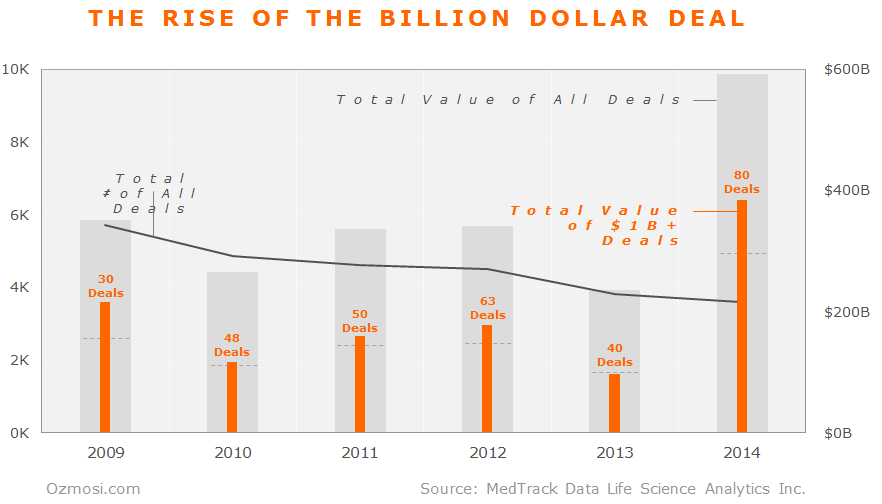 The traditional path for big pharma growth was based primarily on strong research capabilities and internal development of new products. Today, as big pharma pipelines are drying up, there are few alternatives, other than to invest in future growth by acquiring an innovation pipeline externally and often overseas.  Pharma CEOs realize this and are increasingly willing to pay a premium for smaller companies with robust pipelines.

Say what you will about the tax incentives, but our analysis of deals from 2009 to 2014 found the shift from “research & develop” to “acquire & develop” is most likely driven by the need for R&D pipeline growth.

With cash levels up, interest rates low, and increasing pressure to fill their depleted pipelines, pharmaceutical companies are likely to continue acquiring smaller, specialty targets.  Drivers of this trend include recent advances in genomics and personalized medicine, a clearer regulatory path for biosimilars, and record levels of orphan drug approvals.

Newcomers get in the M&A game.

Mid-sized companies are getting into the mix as well, targeting some of the same small- to mid-sized companies that big pharma is targeting, which is threatening to create a changing of the guard in big pharma names. Examples of this are Salix Pharmaceutical’s acquisition of Santarus and Endo’s acquisition of Auxilium Pharmaceuticals, both for $2.6B. 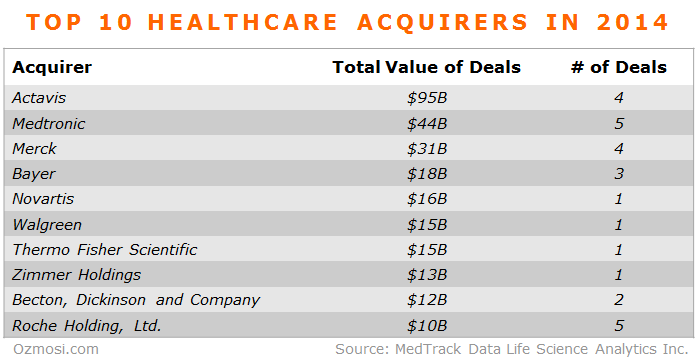 What’s next in healthcare M&A?

We’re beginning to see more and more mid-sized companies making investments at big pharma levels.  Will this change the landscape of what we consider big pharma in the years to come?

Who will be the top pharmaceutical dealmakers in 2015, and what companies are likely targets?  When is the next big wave of M&A deals coming? Do large acquisitions typically pay off?  These are all topics we will be addressing in our upcoming posts on healthcare M&A.

Let us know what you think…and stay connected with us on Twitter and LinkedIn to hear more Healthcare M&A Insights.

Tweets by OzmosiHealth
Go to Top